Withstanding the test of time: A place that reinvents itself to tackle adversity

Every action has its consequences and for RDT Bathalapalli Hospital what followed the announcement of it being appointed as a COVID -19 centre was not only the need to prepare the facilities for this new challenge but to ensure the safety of the other patients. For this it was decided that one of its main departments, Obstetrics, where an average of 20 deliveries are performed per day, would be transferred to another location: RDT 2nd Campus in Ananthapuramu town.

“Can we say to a woman who is about to deliver to wait for 15 days until the lockdown is over? Definitely not. Despite the COVID-19, despite the fear and the uncertainty of these days, life must go on”.  These are the assertive words of sister Theresa, who has been working in RDT 2nd camps for more than 20 years.

“Since minute one our priority has been our patients’ well -being and to ensure their access to quality health care”, explains Dr. Jyothi, head of the Obstetrics department, while organising the transport of dozens of beds and basic tools from Bathalapalli Hospital to this new and temporary location.

However, this is not the first time that this campus has completely transformed itself to respond to the need of the moment. “Built in 1971 this complex, located less than 2 kms from RDT headquarters, reflects the versatility, capability and capacity of this organisation to react to any circumstance. This building embodies the phases that this country has been through”, points out Ms. Anne Ferrer, RDT Executive Director.

From one-to-one to one for many

This campus, also known as The Godown, was originally built as a complex to store grains, milk powder, wheat and oil from American donors. “At that time India did not have the capacity to produce enough food for all its population. We were imports – dependent. Hunger and food insecurity were very high, especially in this area”, explains Malla Reddy, one of the managers of the programmes of that time.

The grains stored in this complex were used to run two projects of vital importance then: Nutrition centres for pregnant women, mothers and children and the Food for Work programme.

The goal of more than 50 nutrition centres set up in the area was to improve the precarious situation of women and children, as many were suffering from severe malnutrition. At that time the infant mortality rate in India was at about 141 deaths per 1,000 live births while few studies point out that the estimated maternal mortality rate was over 800 deaths per 100,000 live births.

The Food for Work programme came from Vicente Ferrer’s previous experience in Maharashtra and its goal was to generate employment for the poorest and to improve their assets in order to make the families self-sufficient, self-reliant and free from bonded labour practices.

“We used to pay the farmers in kind the cost of digging the wells. There was very little flow of money at that time, it was an agricultural economy of subsistence,” remembers Malla Reddy. “Back to the 70s bonded labour practices were still very common, the crops and thus the survival of many was totally dependent on the weather and a year of drought could lead many to famine”.

More than 10,000 farmers directly benefited from this food for work programme, thousands of open wells were dug, 250 houses were built and many youth made their way in life through this programme.

With the new decade, the eighties, the winds of change were sweeping the country as the Green Revolution was at its peak.

In 1976, as the country, the organisation also made a transition: from working with the individuals to organising the communities. “We realised that it was not enough to give an asset to the poor as the inequalities were still prevailing and they were not able to retain it. They needed to organise themselves, and more importantly, liberate themselves from what they considered their fate”. 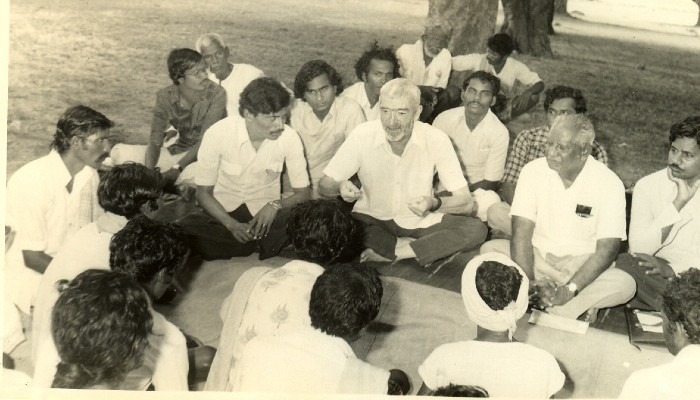 At that time the organisation had little economic support but its knowledge, what used to be called social inputs and awareness, became its strength. “We had nothing to give except ourselves and our knowledge to provoke their thinking”, remembers Reddy.

It was at that moment when RDT started to work in over 200 villages in Anantapur district, a journey that it is still going on in over 3,700 villages where the organisation is currently working in. “The liberation started back then, especially among the youth. We planted a seed that we are seeing blossoming today”. 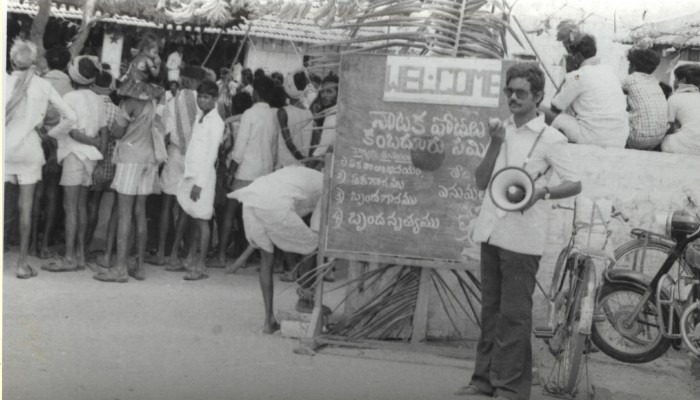 With the all the efforts concentrated at the community level, The Godowns slowly faded to the background as a symbol of another time, but not for long. The new times brought with it new challenges. In the 80´s, Family Planning Programmes were the flagship of the Indian Government, and so it was in Anantapur district. 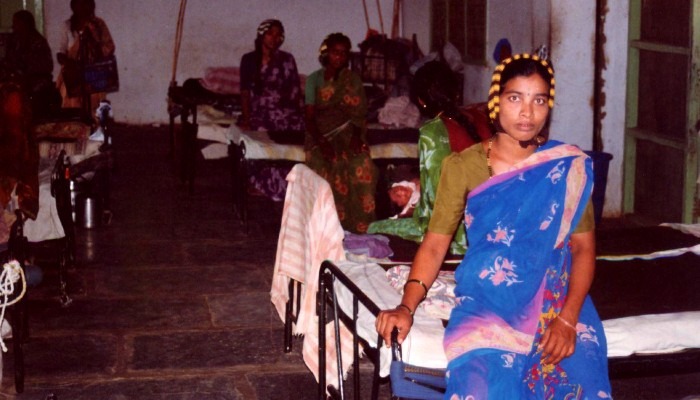 On June 26th 1988 the godowns were transformed into a Family Planning Centre as per the District Collector’s request. “At that time people used to run away from family planning. They told us: Children are our security. Families used to have 10 to 11 children and send them to work as soon as they could”, explains Sister Theresa at the frontline of this centre, who herself was 7th of 11 siblings.

Getting nurses, doctors and qualified staff was very difficult so she found herself doing all the roles that were needed. “I was born in Kerala, I did not speak Telugu, but I learnt the language of love. The patients were my life and they respected me for that”, she recollects fondly.

For many years the Centre was functioning in the old godowns, as it was not until 2002 that the building was renovated and the facilities improved.

With the arrival of the 2000’s came a change in the attitude of the people towards family planning. They were having fewer children and realized of the social, economics and health benefits of having smaller families.   On 16th July 2018 the last laparoscopy. During its 30 years of history, more than 1 lakh tubectomies were conducted and Theresa still remembers the story of many of them. 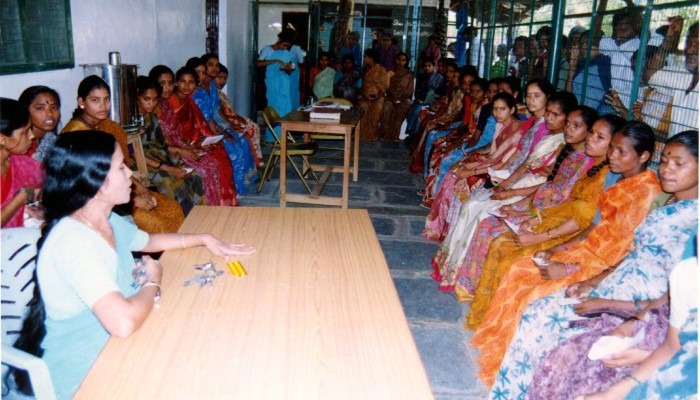 But as this project was reaching to its end another was just starting to bloom. In August 2012 opened its doors in the same building -The Professional School of Foreign Languages.  A residential one year course where graduates from poor backgrounds receive soft skills, English and foreign languages training to improve the employability skills of the youth, as a tool to tackle youth unemployment which is over 20% in the country. 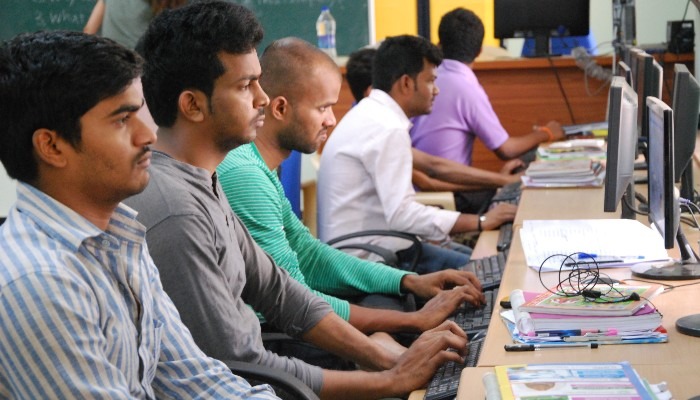 The centre was once again used to disseminate and share knowledge and improve the employability of rural youth. But with the difference that now the students were not illiterates or drop out students, but university graduates. The sons and daughters of those farmers who strongly believe in what one day was promised to them: Education will make you free.

From the virus of poverty to the COVID-19

On March 18th 2020, the AP Government announced the closure of all educational and residential institutions to contain the spread of the COVID-19 and a national lock down declared few days after. The Professional School of Foreign Languages had to close and the student went back to their villages, at least for a few weeks. The building was empty again but not for long as it was upon called to play a very important role. 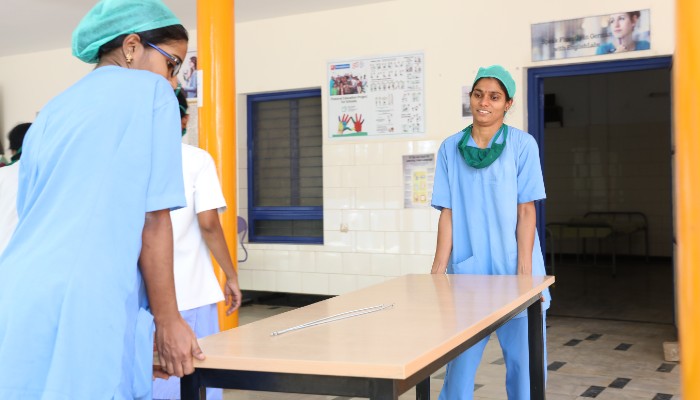 While writing this article dozens of nurses, doctors and support staff from Bathalapalli Obstetrics Department have already shifted to this new location where over 20 deliveries have been conducted. Baby of Renuka, 2,6kg has been among the first. The baby was born without complications and by now mother and baby are both healthy and safe.

“I cannot but to be enormously proud of this organisation and of the courage and capabilities of its people”, expressed Anne Ferrer. “We have been working for the eradication of poverty for the last 50 years, and nothing will stop us from it. It does not matter if it is the virus of hunger or the COVID-19. RDT will be at the frontline ready to act and help. It is on our DNA”. 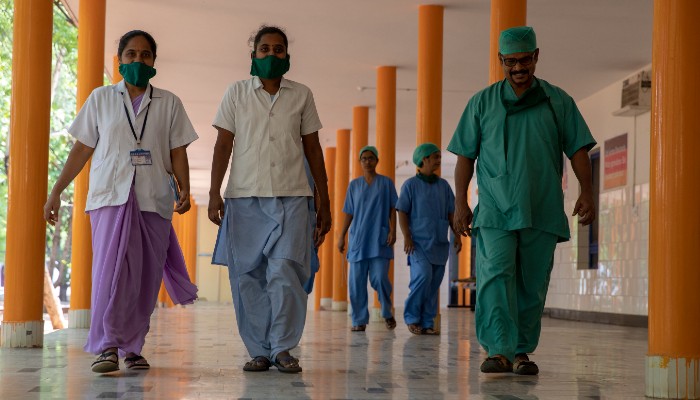 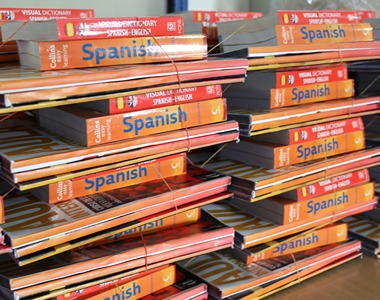