Parivarthana: The story of MMHalli

MMHalli is more than a small village located between the hills and accessible by a winding road of stones and dust. MMHalli is dignity. MMHalli is change. MMHalli is equality. But above all, MMHalli is the courage of its people.

The problems that plagued Anantapur when Rural Development Trust (RDT) first started its work in 1969 were so different from those that exist today. Life was about survival rather than fulfillment because access to basic needs like food, shelter, health were considered to be a luxury for the few.

50 years down the line, the organisation has come a long way along with the people and communities in Anantapur to ensure that development leaves no one behind.

MMHalli is an example of how with love and support people can achieve anything.

Dignity: Nagamma and Venkatesh, a family progressing together

Stories of resistance and equality run through the collective memory of this village which its people built from nothing. “We did not know where to start, only that the situation needed to change. Abuses were part of our daily lives, until we said enough,” says Nagamma, a resident of MMHalli, who is over 60 years now.

“We used to live in huts and work for landlords for merely 2 KGs of rice per day. It did not matter if you were children or if you were sick, we always had to work. The huts were close to one another and the land they were built on got flooded regularly.” Nagamma fondly remembers the time Vicente and the team of RDT arrived in their village. It gave them the courage and strength to approach the government and they were allotted land at the top of the hill.

In the early 90s RDT supported the construction of 49 houses but the priority was to provide a school for the children. With education, came respect. With houses, came stability and the opportunity to think about tomorrow.

“The poor living conditions brought many diseases such as diarrhoea, stomach problems as well as risks among pregnant women.” Nagamma never went to school but was appointed as the first health worker in the village. “Since then not a single child died of diarrhoea nor a single pregnant mother. People from other communities approached me for advice” she states proudly.

Venkatesh, Nagamma’s son, used to work on the land and take the goats graze in the fields like many children of his age until his mother sent him to the RDT supplementary school. The mid-day meal provided at the school played a role in this aspect.

“We were learning under a tamarind tree, the board was the floor and we learnt how to write on the sand. Later, RDT supported us with material and a building,” recalls Venkatesh .

As part of the first educated generation of his village, he believes education grants independence and “helps us understand all aspects of life and society.”

It is this belief that encouraged him to become a teacher at the RDT supplementary school. “I find value in life by creating value for others” he adds.

Sivamma is a sangham leader in the village of MMHalli. RDT’s support motivated the women of the village to come together to form sanghams. “We started by saving 5 rupees per month and opening a bank account. We were also made aware of our rights and how to sign our names on documents.”

The sangham became their safe place to  discuss issues such as gender inequalities and alcoholism which was a strong factor of gender violence in the village and support one another. “Earlier men controlled our every action and forbade us from leaving the house, now we go on our own to public offices, to the bank to manage our savings and even own property.”

For more than a year women of MMHalli got together to shut down the alcohol shop in the village. “Every time a drunk husband beat his wife, we protested in front of the wine shop. We even had informants who told us when they were preparing the liquor in the forest. When that was the case we used to follow them, sometimes at 1 am in the night to stop them from preparing Arak (local liquor),” recalls Sivamma. “The men were using our money to buy the alcohol and later beat us. We had to stop it and we succeeded.”

Change: Anjinama’s courage to break all the barriers

When she was 6 months old, Anjinamma got polio which affected her legs, one hand and hips. She regularly bruised her knees because of crawling. “I faced discrimination at home and outside. My dad thought that there was no point for me to go to school because I had a disability. Luckily, my mum, who was member of the sangham, was a strong woman and believed in my right to education. Because of her support I could study up to intermediate level,” she explains.

RDT supported Anjinamma with crutches and physiotherapy for three years. “Since 2013 I am working as an artisan in IDT Handicraft Centre, I am earning my own income and I am an active member of the Vikalangula Sangham. I can proudly say that today I am independent.”

From the first generation of inhabitants whose childhood was spent toiling on fields to now the third generation who beyond school hours are mingling with their friends on playgrounds.  From those who were neglected the most basic rights to now having access to quality healthcare and shelter.  From those who were suppressed by societal norms to now being leaders of their destinies.  The  story of MMHalli shows a reality that is consistent across villages and represents the journey of thousands from fear to freedom.  A journey towards Parivarthana.

Watch the story of MMHalli through a documentary on RDT’s 50 years which will be released on the 28th October. 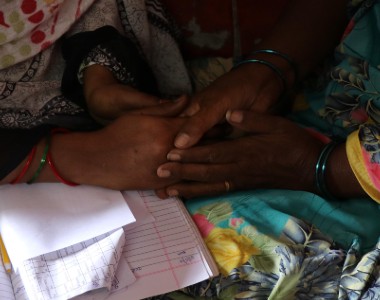 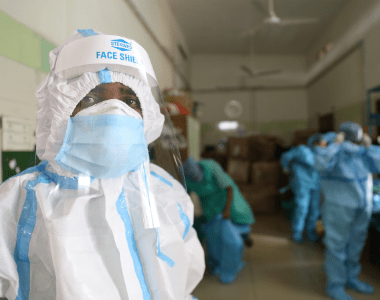 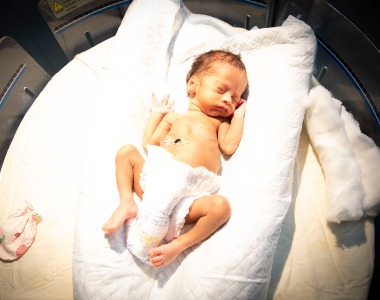 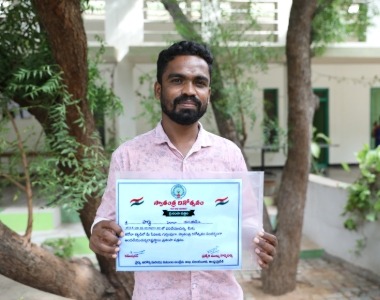 
An undeterred spirit in the midst of un...