Ms. Anne Ferrer, Co-founder and Executive Director of Rural Development Trust (RDT) was announced as the winner of the award “Ignacio Ellacuria de Cooperación 2019” by the Government of Basque Country, Spain. The ceremony took place on Wednesday, 26th February in Vitoria, Spain and the award was presented by the President of the Basque Government, Iñigo Urkullu.

The jury recognised Anne Ferrer’s commitment towards working with disadvantaged communities in India for the last 50 years, especially towards gender equality, leading by example through her work and life.

“Over the last 50 years since Vicente Ferrer and I established the Rural Development Trust, we have worked very hard to alleviate poverty and strengthen communities so they can stand on their own feet. We believe that each community member has the power to lift themselves up and sustain communities for generations to come,” expressed Ms. Ferrer.

“This award is a big joy but also a big responsibility, and we will keep working to honor the memory of people like Ignacio Ellacuria and Vicente Ferrer, who inspired us with their actions and example. With commitment, constancy and our belief in people everything is possible,” she concluded her speech at the award ceremony.

In his speech, the President of the Goverment of Basque Country, thanked the work of Ms. Anne Ferrer, about whom he said, “Hers is a life dedicated to helping others, something that has contributed to change the life of thousands, giving them back their dignity and hope.” He also highlighted the work of Ms. Anne Ferrer towards the improvement of women’s living conditions in Andhra Pradesh.

“Ignacio Ellacuria de cooperacion”  award is awarded by the Government of Basque Country, Spain through the Basque Agency for Development Co-operation. It aims to recognise the contribution of organisations, groups and individuals, from inside and outside the Basque Country, in the fight for equality and justice among people and for overcoming poverty and inequalities. 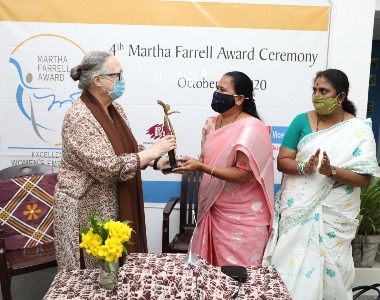